some form of storage media such as a hard disk or CD-ROM. This digitization procedure can be
done by a scanner, or by a video camera connected to a frame grabber board in a computer. Once an
image has been digitized, it can be operated upon by various image processing operations.
Image processing operations can be roughly divided into three major categories, Image
Compression, Image Enhancement and Restoration, and Measurement Extraction[提取尺寸]. Image
compression is familiar to most people. [1]It involves reducing the amount of memory needed to
store a digital image.
Image defects which could be caused by the digitization process or by faults in the imaging
set-up (for example, bad lighting) can be corrected using Image Enhancement techniques. Once
the image is in good condition, the Measurement Extraction operations can be used to obtain
useful information from the image.
Some examples of Image Enhancement and Measurement Extraction are given below. The
examples shown all operate on 256 grey-scale images. This means that each pixel in the image is
stored as a number between 0 to 255, where 0 represents a black pixel, 255 represents a white
pixel and values in-between represent shades of grey. These operations can be extended to
operate on colour images.
The examples below represent only a few of the many techniques available for operating on
images. Details about the inner workings of the operations have not been given.
Image Enhancement and Restoration
The image at the left of Figure 1 has been corrupted

by noise during the digitization process. The "clean"
image at the right of Figure 1 was obtained by applying a
median filter [中值滤波器]to the image.
An image with poor contrast, such as the one at
the left of Figure 2, can be improved by adjusting the
image histogram to produce the image shown at the
right of Figure 2. 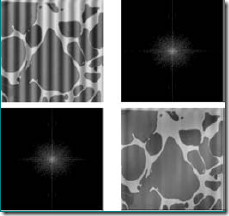 An image which has been captured in poor lighting conditions, and shows a continuous
change in the background brightness across the image (top left of Figure 4) can be corrected
using the following procedure. First remove the foreground objects by applying a 25 by 25
greyscale dilation operation (top right of Figure 4). Then subtract the original image from the
background image (bottom left of Figure 4). Finally invert the colors and improve the contrast by
adjusting the image histogram (bottom right of Figure 4). 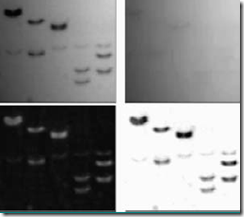 The example below demonstrates how one could go about extracting measurements from an
image. The image at the top left of Figure 5 shows some objects. The aim is to extract information
about the distribution of the sizes (visible areas) of the objects. The first step involves segmenting
the image to separate the objects of interest from the background. This usually involves
thresholding the image, which is done by setting the values of pixels above a certain threshold value
to white, and all the others to black (top right of Figure 5). Because the objects touch, thresholding
at a level which includes the full surface of all the objects does not show separate objects. This
problem is solved by performing a watershed separation on the image (lower left of Figure 5). The
image at the lower right of Figure 5 shows the result of performing a logical AND of the two
images at the left of Figure 5. This shows the effect that the watershed separation has on touching
objects in the original image. Finally, some measurements can be extracted from the image.